No Need To Clean Up

Many of us are familiar with the story of when Jesus was born in Bethlehem. Here is what the Bible tells us happened in Luke 2:8-20:

Now there were in the same country shepherds living out in the fields, keeping watch over their flock by night. And behold, an angel of the LORD stood before them, and the glory of the LORD shone around them, and they were greatly afraid. Then the angel said to them, "Do not be afraid, for behold, I bring you good tidings of great joy which will be to all people. For there is born to you this day in the city of David a Savior, who is Christ the Lord. And this will be a sign to you: You will find a Babe wrapped in swaddling cloths, lying in a manger." And suddenly there was with the angel a multitude of the heavenly host praising God and saying, "Glory to God in the highest, and on earth peace, goodwill toward men!"

So it was, when the angels had gone away from them into heaven, that the shepherds said to one another, "Let us now go to Bethlehem and see this thing  that has come to pass, which the LORD has made known to us." And they came with haste and found Mary and Joseph, and the Babe lying in a manger. Now when they had seen Him, they made widely known the saying which was told them concerning this Child. And all those who heard it marveled at those things which were told them by the shepherds. But Mary kept all these things and pondered them in her heart. Then the shepherds returned, glorifying and praising God for all the things that they had heard and seen, as it was told them.

This is what I'd like to focus on here. Of all the people God chose to reveal the birth of His Son to, He chose the lowly shepherds. Not a king, or a noble. Not a high priest or rabbi. But stinky, uneducated men who spent all their lives around sheep. Why? Was it because they were available and nearby? I don't believe so. There are two things that stand out here in this story.

First of all, they were not indoctrinated with other beliefs. They most likely had no training or education at all in religion. Their world was made up entirely with sheep, and not people. They lived every day and night with them, and the fields were their home. When the angels surprised them that night, their attention was aroused. Imagine what it was like to have a completely quiet, black sky that was sprinkled with stars here and there, suddenly be filled with a bright light and angelic creatures! And to have them deliver this message to them had to be overwhelming!

Because of their innocence, they believed, and went with haste to see this new baby in Bethlehem. And after they had seen Him, they were never the same! They went out and told others about this newborn King sent from God to save the world, and later returned to worship and praise Him. Their encounter with Christ wasn't hindered by previous beliefs, and they were changed.

Secondly, they didn't have to clean themselves up before visiting the new King. They knew He would take them just as they were, so they came with open, believing hearts. Mary and Joseph were amazed with these unkempt visitors, and most likely wondered where these strangers came from, and how they knew. Maybe the shepherds told them the angels came.

The important thing to glean from this story is this: God welcomes all of us to come to Him. There is absolutely nothing we need to do to be suitable or presentable before Him. No matter what we have done, no matter how bad we have been, He loves us, accepts us, and wants to live in all of us. He has done everything that needs to be done through the blood of Jesus on that awful cross to pay the debt owed for our sins. All we need to do is believe. And through this, we can experience His cleansing power over our lives. He will change our hearts when we give them to Him. Sin will no longer have dominion over us. We can finally live in freedom!

That is why we can sing "Glory to God in the highest!!"

Just come as you are to His throne of grace. He welcomes you with open arms! 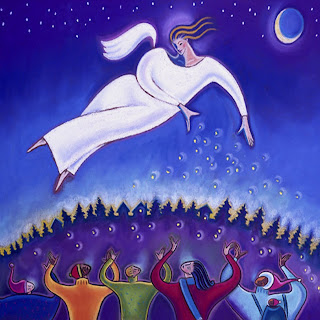