Lately there have been terrible things that have happened to people I know, unexpectedly. While there have always been sadness and tragedy around the world ever since time began, when it happens near you, it hits hard. Especially when death comes to a young person who didn't deserve it.
When it is a crime involved, as it was for a precious little two year old whose angry father took her life in New York State, then you know it was the result of evil. When it is an addiction to drugs, and you know the person is fighting it with every ounce he has, but loses that war, then you know it was the result of evil. Some disagree, but the epidemic of drug overdose and addiction these days are due to Satan wanting to destroy families. When will this all end?
The Bible has an answer to that question. From the beginning, Satan has been the biggest enemy to mankind, and sin has occupied every life. We are born in sin. Because God loves each person so much, He gave His Son, Jesus, on the cross to die for our sins, to be the Lamb of God, to redeem us. And those who have placed their faith in Him as their Savior are guaranteed eternal life. Even children who are too young to be accountable. Even drug addicts who cry out to God for deliverance.
Jesus is the ultimate Light of the world, and even though we are surrounded in the darkness of Satan's schemes, if we focus our lives on that Light, we will make it. Even if it seems that the darkness is greater and is going to swallow you up into eternal hell and suffering, that little speck of light is powerful enough to rescue you from that darkness, and pull you into God's eternal glory. No more tears. No more death. Only pure joy and gladness, in the presence of our wonderful, loving Savior!
Remember not to be overwhelmed by the darkness around you. Keep your focus on God. And He will get you through it all.
The LORD is my light and my salvation.
Whom shall I fear?
The LORD is the strength of my life.
Of whom shall I be afraid?
When the wicked came against me...
my enemies and foes,
they stumbled and fell.
My heart shall not fear,
though war may rise against me.
In this I will be confident.
One thing I have desired of the LORD,
that will I seek:
that I may dwell in the house of the LORD
all the days of my life,
to behold the beauty of the LORD.
Psalm 27:1-4 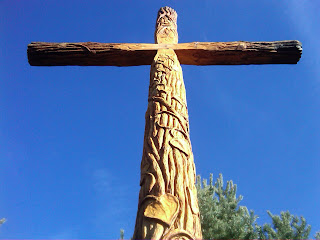 There are things in my life that I wish were different, and when I see others who have what I feel I'm missing, it brings to me feelings of sadness. Late yesterday was one of those times. I knew it was wrong to harbor those emotions of despair, so I tried to read some Scripture before I went to bed.
This morning, those feelings were still there when I woke up. Never the less, I thanked God for His love and mercy on my life, as I'm in the habit of doing each time I awake. I came down stairs, and noticed the bright pink sky outside. Grabbing my camera, I stepped out onto the porch and beheld this gorgeous sunrise. 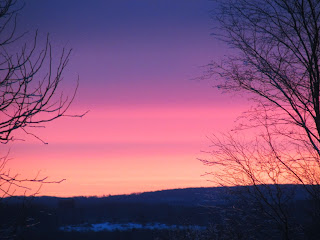 ﻿
Suddenly the song Good, Good Father, by Chris Tomlin, came to my spirit and I was singing it. As I continued to take pictures of this beautiful morning scene, God reminded me of His love, and goodness, and provision, in spite of my circumstances. He also brought to my mind this Scripture:
Whatever things are true, whatever things are noble,
whatever things are just, whatever things are pure,
whatever things are lovely, whatever things are of good report,
if there is any virtue and if there is anything praiseworthy,
meditate on these things.
The things which you learned and received
and heard and saw in me, these do,
and the God of peace will be with you. - Philippians 4:8-9
How I so appreciate my Heavenly Father, who knew what was bothering me, and brought this glorious sunrise to my attention, to remind me of how very much He loves me and cares for me. He is surely a good, good Father.
I feel much better now.
﻿
﻿
Posted by Who Needs His Love? at 2/19/2016 0 comments

When Your Decisions Determine Your Destiny

The kingdom of heaven shall be likened to ten virgins
who took their lamps and went out to meet the bridegroom.
Now five of them were wise, and five were foolish.
Those who were foolish took their lamps and took no oil with them.
But the wise took oil in their vessels with their lamps.
But while the bridegroom was delayed, they all slumbered and slept.
And at midnight, a cry was heard.
"Behold, the bridegroom is coming. Go out to meet him!"
Then all those virgins arose and trimmed their lamps.
And the foolish said to the wise,
"Give us some of your oil, for our lamps are going out."
But the wise answered, saying,
"No, lest there should not be enough for us and you,
but go rather to those who sell, and buy for yourselves."
And while they went to buy, the bridegroom came,
and those who were ready went in with him to the wedding.
And the door was shut.
Afterward the other virgins came also, saying,
"Lord, Lord, open to us!"
But he answered and said, "Assuredly, I say to you,
I do not know you."
Watch therefore, for you know neither the day nor the hour
in which the Son of Man is coming.
Matthew 25:1-13
Many of you are familiar with this passage in the Bible, and understand it's meaning. The oil that the virgins carry represents the Holy Spirit. The bridegroom is Jesus, and the cry at midnight stands for the rapture, which will be unexpected but certain and sudden.
But is there any significance that they fell asleep while waiting? I never gave thought to this before, until recently. I believe that every aspect of a parable has a purpose, otherwise it wouldn't be mentioned. Here is what I think it means.
Prior to them falling asleep, the virgins knew that the bridegroom would be coming, though they didn't know when. Half of them were prepared and were filled with the Holy Spirit. That is, they knew Christ as their Lord and Savior and made every effort to be in an intimate relationship with Him, through the indwelling of the Holy Spirit. They loved Him with all their heart, soul, mind and strength. They not only knew about Christ, they knew Him intimately. These were the wise virgins.
The foolish virgins weren't prepared, as they didn't make efforts beforehand to keep enough oil with them. They were like carnal Christians who know about Christ, they know what the Bible says about His coming, but that is all. They didn't pursue an intimate relationship with Him. They had the head knowledge but not the heart felt relationship.
The Bible has stated in several incidences that when a person dies, he has "fallen asleep", as in the story of Jesus being called to the house of a ruler whose daughter had died. He told them, "The girl is not dead, but sleeping." Then He took her by the hand and she arose. (Matthew 9:18-19, 23-25)Likewise, in this Scripture of the virgins, I believe them sleeping means that they died. They had lived their lives before the time came for the bridegroom to come.
What is interesting is what happens when the call at midnight comes. They all awaken. This represents the rapture. The five wise had been ready before they slept by having the Holy Spirit. Therefore, they were able to go in with the bride groom, and after that, the door was shut. The foolish ones hadn't had the Holy Spirit before they slept, so they weren't ready for the bridegroom. They were kept out. Separated from the bridegroom. Their chances of being with the bridegroom were gone forever.
Conclusion is this: what a person does before he dies seals his eternal fate. Once he dies, it is too late. There is no second chance. In order for a person to be with Jesus in His heavenly kingdom, he must make that important decision to accept Him as Lord and Savior, and live his life in obedience, seeking Him with all his heart, soul, mind and strength. He needs to surrender his life to the will of God. Then when he dies, and if Christ hasn't come before that, He is assured that he will be with Him forever, to celebrate the marriage supper of the Lamb.
If a person learns about Christ, but doesn't make that commitment to follow Him; if he keeps putting  off surrendering his will to God's, then he will not have had the Holy Spirit's indwelling, and will miss the rapture. He will face eternal separation from God, and the fire of hell along with Satan.
An important lesson out of all of this is that what a person does with Christ before his life is over, seals his future destiny. Now is the time to make sure you are filled with the Holy Spirit. Now is the time to make the commitment of following Christ and surrendering your will to His. The worst thing you could hear Him say to you is, "I never knew you." You have this moment to ensure that won't happen. Commit your heart and soul to Him. Accept His gift of salvation and seek Him will all of your being. Love Him with all of your heart.
The current condition of our world reveals that we are entering increasingly strong birth pains, and Jesus told us that when this happens, His return is right at the door. He is coming soon for His bride. The question is: are you wise.... or foolish? 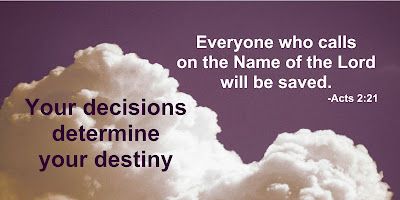