I heard recently of a prominent singer who sang at a large, well-to-do wedding. She and her husband arrived at the reception hall, and as they were waiting in line, she could see ahead of her into a large, gorgeous banquet room. Tables were beautifully set up with fancy hor'doerves, music was playing, and the room was decorated with flowers and tiny white lights, while the people were congregating and chatting. She couldn't wait to enjoy the reception.
When it was their turn, they were met by the host, who asked them their names. She was surprised he didn't know. After all, she was a well-known singer and had just sang at the wedding. He looked at the list, and checked it again, but couldn't find their names on it. They were asked to leave. She was quite upset and tried to explain, but the more she tried, the more firm the host became. Soon, he had them ushered to the service elevator, which took them down to the parking garage.
She began to sob. How could this have happened? Then she remembered. She told her husband she had been so busy that she had forgotten to send in the RSVP. She wasn't concerned because she assumed that because she was the singer in the wedding, it wasn't necessary. She had ignored the request, and had to face the consequences.
This makes me wonder how many people ignore Jesus' gift of salvation and invitation to heaven, but don't respond. They get too busy living their lives and think they'll have time later on to 'send it in'. They assume that their service in the church will be good enough. Or being a good person will be good enough. But when the time comes, they are not admitted into the Grand Banquet Hall of the King Himself. It will be too late.
Like the people in Noah's day who ignored the warnings of not living for the Almighty God, they chose their own way. When the day of the flood of floods came, the door of the ark closed, and they were not allowed in. It was too late. And they were destroyed.
Don't let that happen to you! We don't know when our last day will come. Or when the day of rapture will come. But we need to be ready and prepared. We need to send in our RSVP.
Mine has already been sent. Has yours? 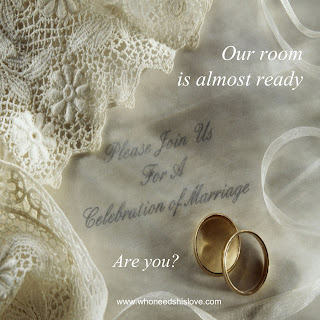